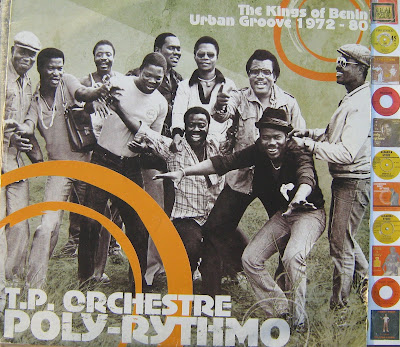 I have just received today my new 2xLp reissue with a great pleasure my copy was pretty worn out.
Thank you *****Miles Cleret*****for all the new fans of Poly-Rythmo.
This must-have compilation was quite impossible to find and was sold more than 60 euros by Ebay sellers now available for 12 £ !
.
Then enjoy at the bottom the brilliant article from the blog***** MUZIKIFAN *****

.
It strikes me as really odd that people will pay $350 for a scratched LP on EBAY just to boast that they own it. It's not like they have a real connection to it, probably never heard of Benin (which used to be Dahomey), couldn't name the President or tell you the names of any famous Beninois -- even members of this band.
.
So not having $200 for such frippery I finally found the scratch to buy the Soundways album I have been hankering after since it came out in 2004. I did not get it at the time because I was sick of Afrobeat & African funk: it seemed everyone was pushing the same Fela-derived beat & it got monotonous. But I like this band, and while I don't own any of their vinyl, I do have the Popular African Music CD in the REMINISCIN' IN TEMPO series.
.

The PAM album, which came out in 2003, was the tip of the iceberg. Günter Gretz had found a dozen albums and sampled three of them for this 77-minute extravaganza. The band is still extant and has been working for over 40 years. Being the top band in Cotonou they got to back all the visiting artists: this helped their adaptability to different rhythms & gave them the chops to play a song for ten or fifteen minutes. The speedy guitarist launches into "Wimoweh" during the bridge in "Oh bea"! Local stars such as Angelique Kidjo and Gnonnas Pedro (there's your JEOPARDY answer) also used them in the studio.
.
They toured widely and during a 1980 tour of Angola were issued firearms for protection in case of a very negative reaction from the audience! But in Libya zealous customs agents destroyed their amplifiers looking for hidden contraband. And piracy took its toll on their sales, so their career ground to a halt. Soukous fans will appreciate hearing the early Theo Blaise Kounkou track "Dety motema." He went on to join Sam Mangwana's African All Stars & recorded half a dozen albums in Paris (now out on 3 CDs) that are top-notch.
.
The secret weapon of the band is Yehoussi Leopold, their churning crankshaft, who is a monster on the drumkit and produces all the polyrhythm you could want. Lead-guitarist Bernard Zoundegnon, a.k.a. Papillon, is the main composer. He likes riffs that sound "flat" to Western ears, reflecting the influence of Oriental Brothers in neighbouring Nigeria, though his arpeggiated style is more a reflection of Congo guitar styles.
You know they had to be unique for Tidiani Koné, saxophonist and leader of Le Rail Band du Mali, to abandon his successfully stint in Bamako & join the Cotonou team.
.
While Benin is a francophone country, it is sandwiched between those anglophone giants Ghana and Nigeria so it got the best of both worlds, and the band would often go to Lagos to record and use the advanced facilities there to produce 45s. Of course this meant they also got close exposure to the Afro-funk movement sweeping Lagos in the early 1970s.
.
The heart of the PAM compilation is two 17-minute tracks, originally issued as the album "Cheri coco" / "Mille fois merci" (Albarika Stores 038). Ostensibly a ballad, "Cheri coco" hits the ground running and the guitarists blaze off in a blur of dextrous phalanges, while the drummer sends his high hat into a gnat-biting frenzy. It's reminiscent of Theo Blaise's work with Mangwana and suggests another influence on the African All Stars (or vice versa, the track is from 1977, the same time as "Les Champions" and a year before Theo Blaise joined Mangwana's group).
.
There's even a radical tempo change in the middle, like the B side heard upside down. The sound quality drops off for the last two Latin numbers with a jerky Mellotron pretending to play piano montuno. However they are definitely cooking and demonstrate the popularity of Guillermo Portabales in Benin.
.
The Soundways compilation is more of T.P.O.P.'s Afro-soul and funk work. Miles Cleret went to Cotonou in 2004 to try & track down the 50 LPs and over 100 45s released by the band, so it's a fair assumption he has his finger on the pulse. It's pretty frantic, poly-rhythmic certainly, with funky and psychedelic overtones, as heard on their Famous Flames-style "Les Djos," with James Brown yelps, even a "give the drummer some" break. This set is geared more towards shorter punchier tracks, the hit singles, as opposed to the album style presentation of the PAM disc.
.
"Kokoriko," which is of course the sound a cock makes to wake you up, really gets your attention. There are also Cuban-influenced moments when they do two more versions of a Guillermo Portabales' tune. These are "Genamou na wili we gnannin," sung in Fon by Meloume Clement, and "Agnon Djidjo."
.
They borrow a Sam and Dave fanfare for "Kou Tche Kpo so o." There is one of the longer jam tracks on Soundways' compilation, "Ne te faches pas." It's my favourite track on here. There's a horn chorus in counterpoint to the vocals and the guitar has a dizzy flanger setting & an itchy restlessness that won't quit.
.
The two CDs give you 2 and a half hours of one of the greatest unknown bands ever.
by Alastair Johnston
http://www.muzikifan.com/africaframe.html
Publié par Z j A k à 17:29