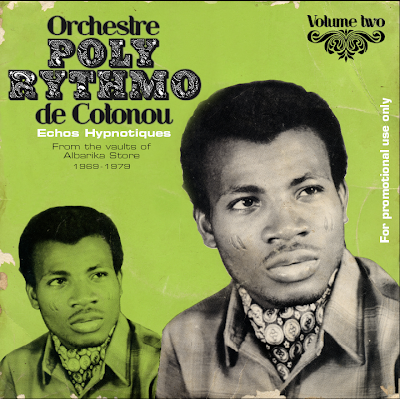 The wonderful booklet sold with the CD could be a collector , Samy won't edit it again. So a measured haste is recommended to buy this masterpiece compilation ! Without a doubt a must-have collection of rare Poly-Rythmo tunes. Please check the Rush Hour page to listen all the samples then enjoy this technical but interesting review from Richard Miller . http://www.rushhour.nl/store_detailed.php?item=51808

Anyone who has been to a concert by Angelique Kidjo since her arrival on the international scene in the 1990s has heard of the West African nation of Benin, and possibly even her hometown, Cotonou. They have also heard the litany of her “influences,” either from her introductions to her own songs or from interviews. But in the European and American press, that litany tends to focus on names like Jimi Hendrix, Stevie Wonder and Carlos Santana, leaving the impression that, before Kidjo, Benin had no music scene to speak of.

This second album in Analog Africa’s series on the band Orchestre Poly-Rhythmo de Cotonou — yes, Kidjo’s hometown — should put an end to that mistake. Simply put, Orchestre Poly-Rhythmo, while less known outside Africa than its contemporaries of the 1960s and 1970s, was every bit as talented and inventive. Echos Hypnotiques collects 15 cuts from the Cotonou label Albarika Store to showcase a heady mix of funk, afrobeat, sato, and soul.
The very first cut, “Se ba ho,” grabs the listener’s attention, starting with traditional handclaps and hand drums, adding organ, bass, and guitar within ten seconds, and by 30 seconds, drumkit, percussion, and horns to create a loping 12/8 background to shouted lyrics in call-and-response format. “Mi ve wa se,” using the same instrumentation as the first cut, is built on traditional drum ensemble rhythms, giving an unusual eight-beat structure with a hiccup – a silence between the fifth and sixth beats. Out of this beat rise guitar and organ solos that would not be out of place in a piece by the Rail Band or Bembeya Jazz. “Azoo de ma gnin kpevi” is half Afrobeat, half funk, and half rumba, with cowbell sounding the clave, horns and organs handling the chorus, bass working with the rhythm guitar and percussion to drive everything forward.
Many of the cuts on Echos Hypnotiques are like this, a seamless mix of African and Afro-American. Not all of the songs on this disc mix and match, however; “Malin kpon o” is pure Motown, “Mede ma gnin messe”and “Agnon dekpe” are all Afrobeat, while “Zizi” is Congolese rumba. But regardless of whether it’s a “pure” song or a mix, the traditional polyrhythms of Benin are never far behind, and several cuts make that tradition the core of the song. “Koutome,” for example, is built entirely on the interlocking drum patterns, which structure the bass and rhythm guitar and provide the melody for the vocals. Only the instrumentation (and the guitar solo halfway through) tips off the listener that the edges of tradition are being pushed.
This is exciting music performed by accomplished musicians, a marriage of complex rhythms, funky guitar solos, and hot horn breaks that could only have come from the homeland of Vodoun.
By Richard Miller
http://www.dustedmagazine.com/reviews/5376
Publié par Z j A k à 19:21