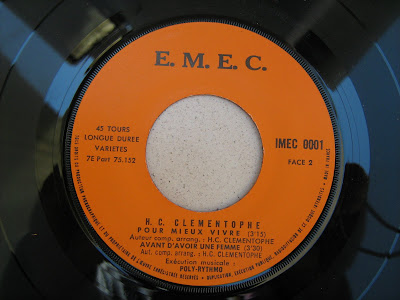 This copy is near mint so defects are due to recording and mastering.
One more time a very low mono single but ... a two sider amazing one ! 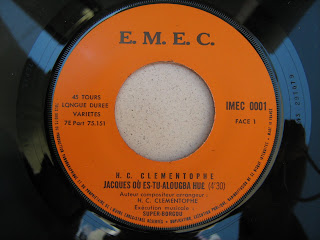 
This one is a weird one… From what I can tell, H. C. Clementophe is chanting and singing over a previously released recording by Orchestre Super Borgou. The flip, is the same sort of thing, but over two Orchestre Poly-Rythmo tracks…

What you have is very similar to toasting, which started in Jamaica as early as the 1950s. But, to the best of my knowledge, toasting was done live in the dance halls – and not in the recording studios. I also seriously doubt that H. C. Clementophe was listening to Gil Scott-Heron – who was using a live band… So how did some one in Africa – presumably in the 1970s – pick up on this? I have to admit, I am a bit suspicious as to the origins of this particular record… I have never seen another record on this label, and there is no indication as to when it was released.
This comment recently found on : http://radiodiffusion.wordpress.com/ is interesting !
If I vote for a genuine one , I understand the doubt !
Weird it is ! but "madness" is not missing in the 60's and early 70's records from Benin.
Please read my answer on chapter {172}.
Publié par Z j A k à 15:59