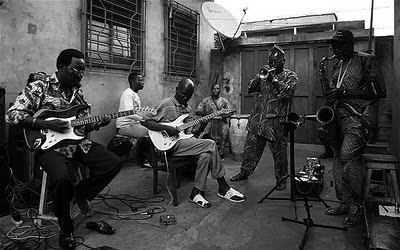 Le disque est sorti ! Chers amis du Poly-Rythmo français, votre attente va être récompensée car le double CD disponible en France est une édition exceptionnelle  : deux CD + vidéo, live, bonus inédits, 52 pages de livret et une surprise !
Ne manquez pas les concerts : le 20 avril à la Cigale à Paris
le 5 mai à La Scala de Londres
******* ஜ ۩ ஜ۩۞۩ஜ  ۩ ஜ *******
NEW POLY-RYTHMO'S ALBUM "COTONOU CLUB" .......>  REVIEWS
I feel too much involved to be really objective, so allow me to present a choice of reviews essentially from Brit Press and just add : I LOVE *COTONOU CLUB* ! Wise fans might enjoy a lot the special edition with many surprises !...and let your/their voodoo workin' !
Z j A k
*****
...If some of this music’s Proustian resonance – the sense of privileged listening in on another time and place – has disappeared in the transition from crackly vinyl to all-mod-cons super-clarity, it has gained in power and energy. The African-American funk echoes in the slippery guitars and rolling Hammond organ grooves may parallel Fela Kuti’s afrobeat, but they’re shot through with flavours darker and stranger.
Von Vo Nono, indeed, sounds like vintage afrobeat with a gun behind the rhythm section, Fela’s bombed-out pidgin English replaced by the sing-song intonations employed by voodoo priests. The barnstorming Gbeti Madjro, featuring Angélique Kidjo, the only other Beninois to make an international impact, features a rip-roaring solo from a guitarist who sounds as though he’s been waiting 20 years to play. This album’s moods are wonderfully diverse with its shifting rhythms, scorching horns and whole team of fired-up singers taking turns at the mike.
Mark Hudson
http://www.telegraph.co.uk/culture/music/cdreviews/8407091/Orchestre-Poly-Rythmo-Cotonou-Club-CD-of-the-week.html
*****
...It continues their tradition of specialising in all styles, mixing Afrobeat with funk, jazz and local voodoo influences, here with help from celebrity supporters. Angélique Kidjo joins the stirring, funky revival of Gbeti Madjro, the new Malian star Fatoumata Diawara adds sturdy vocals to the brassy Mariage, and there's even an appearance by members of Franz Ferdinand on the rumbling finale, Lion Is Burning. It's a cheerful, stirring and perhaps deliberately unfocused set, but they sound even better live.

*****
Does the new Poly-Rythmo measure up to the old? In a few very important respects, it does. It's never going to be the 70s again, of course, and there is a certain spirit of invention and restless creativity on the best of the classic Poly-Rythmo records that a project like this has little hope of recapturing. But it's more than a simple nostalgia trip. For one thing, it doesn't entirely give in to the appetite for funk that caused European and American audiences to get interested in the first place. Sure, most of the music leans that way, but Poly-Rythmo were always an eclectic band, and they haven't forgotten that here, mixing in a bit of highlife and rumba and taking a few surprising side trips into jazz. The result is something that feels a little like one of their old LPs with more studio polish-- producer Elodie Maillot took care to record the band on analog equipment to get some semblance of the natural warmth of their old albums, but the sound is left unadorned, just the band playing.
Amongst the new songs, they revisit a few past glories of Beninois music, including their biggest hit, "Gbeti Madjro". On it, they've recruited Benin's biggest pop star, Angelique Kidjo, to share the lead with Ahéhéhinnou while the band holds down the classic breakneck Poly-Rythmo groove, derived from a blend of funk and vodoun ceremonial rhythms. The band spins through tough Latin funk on "Koumi Dede", setting merengue piano against stabbing guitar and making room for a startling jazz solo by keyboardist Moïse Loko. Gnonnas Pedro's classic "Von Vo Nono" (featured on Analog Africa's Legends of Benin compilation) gets a slowed-down heavy funk treatment, the twin guitars of Ajanohun and Fifi LePrince put air in the highlife lilt of "Ma Vie", and there's even an unexpected collaboration with Franz Ferdinand's Nick McCarthy and Paul Thomson on "Lion Is Burning", a thumping Afrobeat rave-up that's been slotted as a bonus track.
I don't expect Orchestre Poly-Rythmo to return to their old prolific ways, but it's good to hear from them again. A common theme with these West African bands that have returned in the last decade-- think Bembeya Jazz and Orchestra Baobab-- is that they were dominant in their best years, but the stories ended unsatisfactorily. Coming back now and releasing albums that are close to the level of their classic material, not to mention playing around the world to big crowds, provides a sort of closure. It ends a long song on a high note, and if we're lucky, maybe even begins a new verse. Twenty-odd years ago, when Poly-Rythmo last made a studio album, they were at their lowest ebb. Cotonou Club finds them at another high.
Joe Tangari
http://pitchfork.com/reviews/albums/15232-cotonou-club/


*****
‘They’ve got their mojo working again after a quarter of a century’
‘This one has the legs to run and run’
MOJO magazine
Perhaps unsurprisingly, Cotonou Club largely consists of re-recordings of vintage material; some of the original pieces can be heard on the albums mentioned above. Ne Te Faches Pas is a strong opener, which retains its rubbery disco bounce and slick brass riffs (strongly reminiscent of late-80s OK Jazz), but is less than half the length of the version on The Kings of Benin (2003). In contrast, Gbeti Madjro is only slightly shorter than the old version, and has a welcome contribution from Benin’s sole superstar, Angelique Kidjo, who apparently used to sing with them. Of the other highlights, their take on Gnonnas Pedro’s Afro-funk gem Von Vo Nono, and the Afrobeat shuffle of Holonon (complete with James Brown-style screams and Moise Loko’s wonderfully cheesy keyboards) are the most noteworthy.
Sadly, the rest is less consistent. Lion Is Burning was recorded with two members of celebrity fans Franz Ferdinand but is little more than a jam, and seems to borrow quite heavily from Hugh Masekela’s Don’t Go Lose It Baby. Jeremy Tordjman’s rather flowery sleeve notes outstay their welcome, making spurious mileage out of Poly-Rythmo’s purely musical connections with the vodoun religion, which members are keen to stress they don’t adhere to. And it’s a shame the band don’t stretch out a little more on some of the songs. Even so, if Cotonou Club isn’t quite what it might have been, fans should bear in mind that the reformed Orchestra Baobab didn’t really hit their stride until their second ‘comeback’ recording.
Jon Lusk
http://www.bbc.co.uk/music/reviews/z89p

*****
It took far too long for Orchestre Poly-Rythmo — with or without “Tout Puissant” (all-powerful) appended — to make its name beyond Benin, where the group was formed in 1968, and elsewhere in West Africa, where it did all its performing until it toured Europe in 2009 and the Americas in 2010. Now it has made its first studio album since the 1980s: a chance to hear in detail the workings of a great funk band that still plays like young men.
The 11-man Orchestre Poly-Rythmo merges once-forbidden voodoo rhythms from Benin with the many other sounds that were percolating through West Africa in the 1960s and ’70s, among them Fela Kuti’s Afrobeat, James Brown’s funk, Afro-Cuban rumba and salsa, disco’s analog synthesizers and Afro-Brazilian rhythms. Horns punch out soul riffs; singers rasp, hoot and sometimes shout. The syncopated layer of brisk triplet voodoo rhythms from bells, hand drums and shakers — prominent in “Oce,” in which they intertwine with staccato guitars, and in the wah-wah-laced “Tegbe” — may well be the catalyst that makes the songs always seem to be eagerly leaping ahead.
For this album the group combed its huge repertory for surefire material, reviving older songs. The grooves lean toward salsa in “Koumi Dede” and Afrobeat in “C’est Moi ou C’est Lui,” but Orchestre Poly-Rythmo ratchets up the rhythms. Its singers work hard too; in the speedy “Gbeti Madjro,” which has a guest vocal by Angélique Kidjo (also from Benin), the bandleader, Mélomé Clément, answers her with a flat-out raspy scream.
“Cotonou Club” is the latest example of the symbiosis between wrongly obscure funk makers and once-distant fans who push them toward the wider world. It was produced by a determined French journalist, Elodie Maillot, and its final track, “Lion Is Burning,” is a collaboration with Paul Thomson and Nick McCarthy of Franz Ferdinand. The opening rhythm, British-style dance-rock, is a little stiff, but Orchestre Poly-Rythmo doesn’t let it stay that way. It piles on stuttering horns, wah-wah keyboards, quick-scrubbed rhythm guitar, group vocals and a very busy cowbell, and the polyrhythms ignite.
Jon Pareles
http://www.nytimes.com/2011/03/29/arts/music/new-music-from-britney-spears-and-if-by-yes-review.html
Publié par Z j A k à 15:12